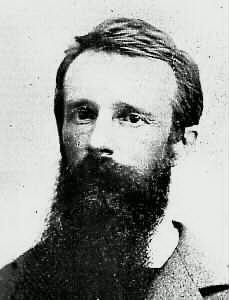 In 1969, at the tender age of 17, I read the first edition of an afternoon Melbourne newspaper published by the "Age" called "Newsday", although this only lasted a couple of months the inaugural edition was special for me as the centre spread of two pages was an article on Civil War re-enactors portraying a Civil War battle on the outskirts of Melbourne. I wrote to the editor of the paper who put me in touch with the people concerned.

I had been interested in the Civil War since the mid 1960s which at that stage was commemorating the centennial of the rebellion; the Melbourne newspapers had articles about Abraham Lincoln and the plans to commemorate the war, books by Bruce Catton were popular and the National Geographic Magazine had three feature articles on the war in 1961, 1963 and 1965. I can also remember buying the "How And Why Book on the Civil War" when I must have been about ten or eleven and that left a lasting impression with me. My parents encouraged my interest and when the three volumes of Bruce Catton's Centennial History was made available in a Melbourne bookshop they deliberated over the cost of Aus$27.00 for the trilogy, at that stage being a pretty expensive Christmas present. However their choice was not in vain and from their my interest was cultivated. Although I was Australian-born and bred (of English stock) there was something of the Civil War that has continued to play a big influence in my life. My father's father had been on a round the world ocean-voyage and brought back a copy of Bruce Catton's "American Heritage History of the Civil War" so for all intensive purposes our knowledge came from Bruce Catton's information.

Having contacted the local Civil War organisation in Melbourne, I found that it was a re-enactment group titled "Company A, 1st Tennessee Infantry, re-activated" and had received a charter from a similar group with headquarters in Oak Ridge, Tennessee, which had participated in the centennial of the battles marching and fighting from 1961 to 1965 in all of the major re-enactments of the eastern battles from Manassas to Appomattox. The Melbourne group consisted of about half a dozen people who had been interested since the early 1960's. Australia also had other Civil War groups, the most notable being the American Civil War Research Group in Sydney with Len Traynor as the mainstay of that group. Since then other Civil War groups have sprung up in Adelaide, Perth and Brisbane plus Civil War wargaming and living history groups have been prominent around Australia.

The 1st Tennessee was mainly a group interested in doing weekend re-enactments in the hills around Bacchus Marsh, 30 miles west of Melbourne and meetings were held on an informal basis once a month with a newsletter being distributed amongst the members and a small overseas group of readers. When the adjutant (secretary) of the group went on an extended trip around Australia in 1971, I took over the secretarial and editorial roles and continued that for many years. In 1972, having found that the scope of the group was limited to historical representations of the military side of the Civil War, we decided to form the American Civil War Round Table of Australia and the basis of the original membership was the re-enactment group. The original president was Adrian Pearce and myself as Secretary/Editor. The first meeting held in May 1972 attracted about ten people, now we are able to draw up to thirty people in Melbourne to special meetings. Overseas and outside lecturers have allowed us to expand our area and the first Civil War Symposium held in January 1992 instigated a new wave of togetherness.

Monthly meetings were held in a variety of locations, starting off at member's houses and gravitating eventually to a central point in downtown Melbourne. The membership grew to include members from all of Australia's states and territories plus a number of overseas members and subscribers to the newsletter. The monthly newsletter at one stage was being sent out at 120 copies per issue to locals and 40 overseas connections which included newsletter exchange with similar societies in the U.S., Canada, England, France, Belgium and Norway. Other correspondents have been in the Netherlands, Germany, Malaysia and New Zealand. The Round Table has also hosted exhibitions of Civil War memorabilia belonging to members and now sponsors a Civil War essay competition for members of Australian secondary schools through the History Teacher's Association and another for tertiary students at Australian universities and colleges. After several years the competition has received significant responses to its quest for knowledge.

In 1977 I took my first trip to the U.S. which was followed up by other trips in 1979, 1983, 1988, 2006 and 2007, a total so far of about 36 weeks. I have lectured at Civil War Round Table groups at Jackson, Mississippi; San Francisco, California, Oak Ridge, Tennessee, Atlanta, Georgia; Southern Fairfield County, Connecticut, the Richmond Prison Civil War Round Table and attended as a guest at meetings in Los Angeles, the Peninsula, California (outside San Francisco), Dallas, Texas; Houston, Texas; Knoxville, Tennessee; Chicago, Illinois; New York City, New York; Boston, Massachusetts; Pittsburgh, Pennsylvania; Richmond, Virginia; Suffolk, Virginia; Raleigh, North Carolina; Louisville, Kentucky; Hagerstown, Maryland and attended Civil War Round Table Congresses with delegates from other states in Jackson, Miss., Charleston, S.C., Fayetteville, Ark., and Nashville, Tenn. Through meeting the other delegates and my dealings with other contacts the wide variety of people has proved to be quite valuable for information and research.

Highlights of the trips have included in 1977 attending the premiere of the film "The Lincoln Conspiracy" at the Lincoln Memorial University in Harrogate, Tennessee, the film's producers being in attendance and a special guest was Colonel Harland Sanders of Kentucky Fried Chicken fame. With my involvement with the people in Tennessee and Kentucky I have been made both a Kentucky Colonel and a Tennessee Colonel, thus being an honorary citizen of both states (although I don't think it grants me any other benefits apart from the proud links with those states). Through the network of Civil War Round Tables I have established a group of very helpful citizens who are only too pleased to assist with their knowledge and friendship.

I've managed to walk over most of the battlefields and wandered through most of the Civil War museums in the United States as well as seeing a lot of the book dealers and book shops which have sprung up over the past twenty years. By keeping an eagle eye on books on the Civil War my library now holds about 4,750 volumes plus another 2,000 journals, magazines, pamphlets and other paperwork. This is assumed to be the largest collection outside the U.S., including both public and private collections. Although the bulk of the library specialises in military topics there are also a wide variety of biographies of participants and other subjects such as the navies, medicine, technology, economics and political events. Beause of the variety of requests that I get for information I've tried to have a little of everything available in case they try to stump me for answers.

During the almost thirty-eight years of the operations of the Round Table of Australia I have assumed the role of president for eight years and secretary or editor for another twelve years. I received an honorary life membership for services rendered and received the award for Civil War research on three separate occasions. I was responsible for the society to become incorporated and have held the largely honorary job as public officer since the incorporation eight years ago. Surprisingly how much needs to be done to keep such a group going and it's been very handy to have a close group of hard workers involved with our Round Table.

We have been fortunate as well to get an occasional overseas visitor and each time that someone known to the organisation is in Melbourne I have tried to make myself available as tour gruide and make a point of showing our tourists the Civil War sites of Melbourne and the surrounding area. Several of these contacts have become very close correspondents and as much as the great amount of hospitality shown towards me during my trips to America, I can pride myself on our ability to show the similar aspects of Australia.

My research has centered around the exploits of Archer's Tennessee Brigade (of which the 1st Tennessee was a portion) and this has now amounted to a manuscript of 1200 pages including rosters of the men and regimental histories. A publisher in Tennessee has the manuscript at present and plans are underfoot for it to be printed in the near future. Another sideline has been Australia's connections to the Civil War and with the assistance and co-operation of our circle of three other researchers in the Round Table about 250 pages have been prepared. This deals with the Civil War men who were in Australia prior to the war; the ninety-odd Australian-born Civil War soldiers and sailors currently known, the visit of the Confederate warship "Shenandoah" to Melbourne in January 1865 and the veterans of the war who are buried in Australia. This last area currently lists about 100 known and confirmed Civil War veterans buried around the Australian towns and cities, several more names are uncofirmed and ongoing research continues to be conducted to verify the information.

Other interests of mine include Civil War music and cinema; philately and Abraham Lincoln. I am also attempting to prepare lists of Civil War soldiers which have not appeared in state rosters and currently have 1,200,000 names on a computer database which grows every week. As the National Park Service now has a database available in Civil War battlefield parks of every known participant, this will be a great help for our research efforts.

I am a member of various Civil War societies including the Society of Civil War Historians, the Civil War Veterans Historical Association, the Abraham Lincoln Association, the Surratt Society, the Company of Military Historians, the Museum of the Confederacy, the Civil War Preservation Society and I have been a member in the past of Civil War Round Table Associates, the Confederate Historical Society (in England), Association for the Preservation of Civil War Sites, the Richmond Civil War Round Table, the Confederate Stamp Alliance, an associate of the Sons of Confederate Veterans and the Sons of Union Veterans of the Civil War and subscribed to over twenty magazines and journals. I have lectured around Melbourne on the subject of the Civil War to various historical societies and educational facilities and am involved with plans to commemorate the visit of the "Shenandoah" to Melbourne with a permanent marker at Williamstown, where the "Shenandoah" was docked for repairs. A number of American tourists have arrived in Melbourne over the past twenty years who have been taken on guided trips around the Civil War links of this city and it is becoming an increasingly interesting study to tie up our threads between the two nations.

After over for decades of study I can see a large future for our work on the links of Australia and the Civil War and look forward to many more years of research and correspondence which currently stands at around 500 letters per year. In the past ten years I can look at 5,000 pieces of mail being sent out from this desk to continue the task of maintaining a link between our members and friends.

Go to my homepage for all links to more pages